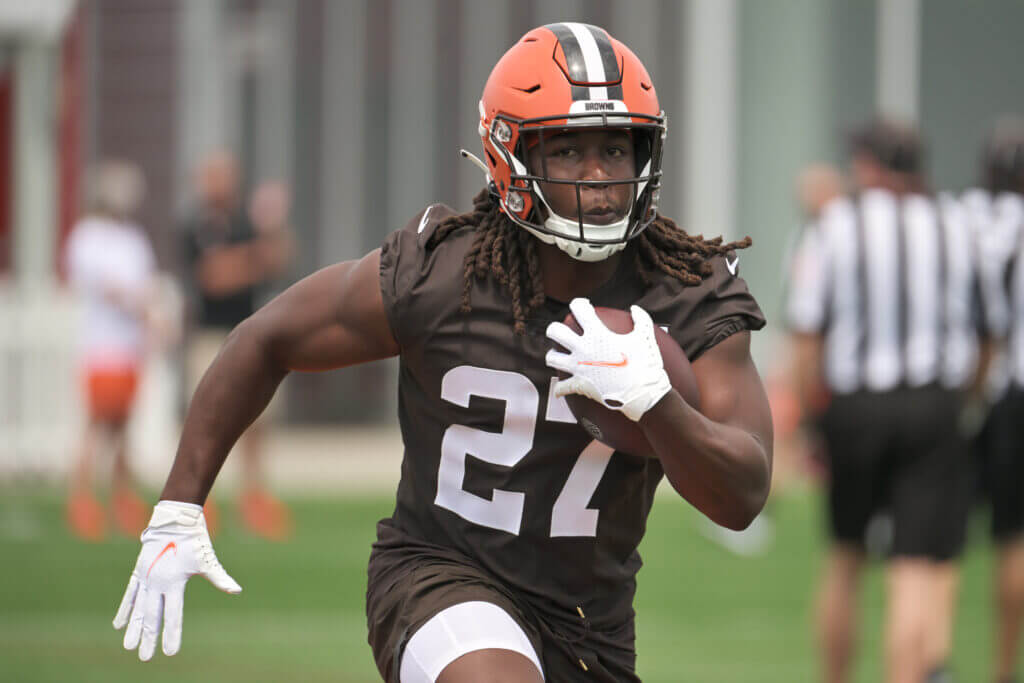 BEREA, Ohio — I’ve watched just about every minute of the Cleveland Browns training camp practices to this point, and before Saturday afternoon I was unaware that Kareem Hunt was not participating in team drills Friday or Saturday.

A large part of that is that the Browns rotate running backs and wide receivers on every play. Nick Chubb is always first in the running back lines, and with an early rash of injuries across the wide receivers depth chart, the rotations there have constantly changed. Saturday was the Browns’ fullest practice when it came to competitive drills, but outside of one Chubb breakaway run — a daily occurrence, by the way — it was a rather nondescript day for the running backs.

About 30 minutes after practice, CBS Sports reported that Hunt isn’t participating in team drills because he wants a new contract. A team source confirmed that Hunt presented the Browns with that Friday, and Hunt’s hope is that he’ll either get a new deal or get traded. In June, Hunt talked publicly about wanting a new deal with his hometown team ahead of the final year of his current contract.

The Browns weren’t prioritizing that then, and given the Deshaun Watson uncertainty, the Browns have more pressing issues with which to deal now. The Browns and Watson are playing the waiting game after the NFL appealed a six-game suspension leveled against Watson on Monday for multiple violations of the NFL’s personal conduct policy. The NFL Players Association filed its response to the NFL’s appeal Friday, and we’ll likely soon find out whether the NFL will get the yearlong suspension of Watson it’s been seeking since early summer.

So, Hunt’s timing here is curious. To me, his leverage is almost nonexistent — and so is a potential trade market for him. Hunt, who celebrated his 27th birthday Saturday, is a good player and the Browns missed him last season as he battled injuries. But even without the Browns being otherwise occupied and potentially soon chasing emergency options at more pressing positions, they’re already over capacity in the running backs room and focused on the daily grind of training camp. Hunt has been in practice every day and went through individual drills Saturday, as he’s done every day previously.

The Browns are better with Chubb and Hunt than they are with just one of them, and a yearlong suspension of Watson would mean they’ll need to rely on the run game even more than they were already built to do. Maybe they’ll guarantee Hunt’s 2022 salary of $6.25 million — he’s slated to make the bulk of it through a series of roster bonuses — but the Browns simply aren’t going to commit further to Hunt until they both get clarity at quarterback and see Hunt healthy and producing on the field. For now, D’Ernest Johnson and Jerome Ford can take the reps.

The whole thing just seems strange. Which made Saturday just another day in this abnormal — even by Browns standards — training camp.

• There was no change in the quarterback rotation Saturday. Watson is still first in every line, and Jacoby Brissett is second. Brissett has been getting snaps behind the first offensive line but didn’t get many Saturday as the Browns focused on red zone and short-yardage situations. Saturday was the Browns’ ninth full-squad practice of camp and their third in full pads.

Joshua Dobbs is still third in the quarterback line and Josh Rosen is still fourth. Browns coach Kevin Stefanski said Friday there likely won’t be a change until the Browns get “clarity” on Watson’s status. Stefanski has said for months the Browns have a plan on how they’ll divide reps and get Brissett ready to start the season, but thus far Stefanski has shared no details on that plan and no major changes have been made to the practice rotations.

• To this point, my most outstanding player of camp has been second-year cornerback Greg Newsome II. Newsome’s strong showing continued Saturday as he left his feet to pick off Watson in the end zone in an early one-on-one drill, then caught another interception off a David Njoku drop in a team drill.

The Browns picked Newsome in the first round in 2021 because they loved his toughness, athleticism and savvy. He’s come back a more confident and polished player in his second camp, and he’s been a prominent player for a defense that’s consistently making things difficult for the Browns’ pass game regardless of who’s at quarterback. When any quarterback besides Watson is in team drills, completions of more than a few yards down the field have been few.

With Denzel Ward still watching from the sideline with a foot issue, the Browns played rookie Martin Emerson Jr. opposite Newsome with the first defensive group Saturday. Greedy Williams and A.J. Green have also taken first-team reps over the last week.

• Based on my sideline eye test, Corey Bojorquez is the early leader in the punting competition. After missing a few days of practice due to an injury on his plant foot, Bojorquez impressed Saturday with a series of booming kicks in a live punting drill. Joseph Charlton was second in line, and though Charlton got nice hang time on his punts, Bojorquez consistently got both distance and plenty of air under his.

Rookie kicker Cade York continues to impress. York had his first miss of camp Friday on a 58-yarder that was wide, but one kick earlier he made a 53-yarder off the top of the left upright. York is showing off plenty of leg strength, and fans at camp have shown their appreciation for his early efforts. The Browns might have to win some 16-13 games, which makes their aggressive move to get York in the fourth round seem like a sharp one based on this early sample.

• The wide receiver shuffle continues. Rookie David Bell (foot) and Anthony Schwartz (knee) returned to practice Saturday, though neither participated in team drills. The Browns still have high hopes for Bell in his rookie season and believe he can make up for the time he missed while on the physically unable to perform list.

Rookie Michael Woods II, who was off to a strong start, is now out with a core muscle injury. Woods missed most of the spring and is now back on the sideline after he’d made several impressive catches early in camp. With Amari Cooper getting a veteran’s day off Saturday, the Browns had Donovan Peoples-Jones, Ja’Marcus Bradley and Demetric Felton Jr. working with the starters.

It’s still early in camp, and the wide receiver injuries certainly haven’t helped Brissett, Dobbs and Rosen develop timing. So though it’s too early to panic, the pass game remains an adventure.

The Browns also made a defensive end swap Saturday with veteran Stephen Weatherly (knee) landing on injured reserve and USFL Defensive Player of the Year Chris Odom replacing him on the active roster. It seems like the Browns’ top four defensive ends are set as Myles Garrett and Jadeveon Clowney will be the starters and Chase Winovich and rookie Alex Wright will be the top backups. Odom will have the preseason games to join Isaac Rochell and rookie Isaiah Thomas in trying to impress and earn a roster spot.