The scratch of One Master opens the gate for Order of Australia to draw into the Mile from the also-eligible list. The colt by the Galileo stallion Australia is one of six runners expected to run in Breeders’ Cup races on Saturday for trainer Aidan O’Brien, who has three entered in the Future Stars Friday races.

In today’s edition of the News Minute, Ray Paulick reviews O’Brien’s impressive Breeders’ Cup statistics: he’s second all-time in starts and money won and fourth in wins. But he points out that O’Brien’s Breeders’ Cup record since 2016 has been anything but “magical.”

Paulick also reveals who he thinks might be the speed of the speed in Saturday’s Breeders’ Cup Turf Sprint. 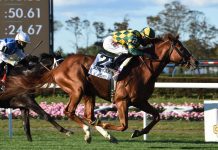