Opening weekend at Keeneland delivered results that may have Lobo saddling three Breeders’ Cup contenders this year, as Brazilian-bred In Love powered to an authoritative lead in the stretch of the Grade 1 Keeneland Turf Mile while accomplished stablemate Ivar, another Brazilian-bred, finished fourth. The victory earned In Love a spot in the G1 Breeders’ Cup Mile at Del Mar on Nov. 6, and Lobo said Ivar (who won Keeneland’s Shadwell Turf Mile last year) may go to the Mile as well if he can get a spot. Ivar finished fourth in last year’s Breeders’ Cup Mile. In September, Argentine-bred Imperador held off a late bid from Arklow to win the G2 Calumet Turf Cup at Kentucky Downs, earning a spot in the G1 Breeders’ Cup Turf.

All three runners are co-owned by Bonne Chance Farm and Stud R.D.I. LLC.

“It’s my first year to try to take three horses,” Lobo said. “I’m very happy. You need to enjoy the moment. It’s not easy to have three good horses in the barn at the same time.”

Although it will be Lobo’s first time taking multiple shooters to a Breeders’ Cup, it won’t be his first appearance there.

Lobo is a fourth-generation horseman who grew up going to the racetrack with his father in his native Brazil. He has a brother who is an auctioneer and an uncle who is a veterinarian. Training horses was a foregone conclusion for him, and he’s happy about that. Lobo began as an assistant to his father in 1987 and hung out his own shingle eight years later, quickly becoming the youngest trainer in Brazil to win a race at the age of 26.

But for Lobo, the dream was always to train in the United States. 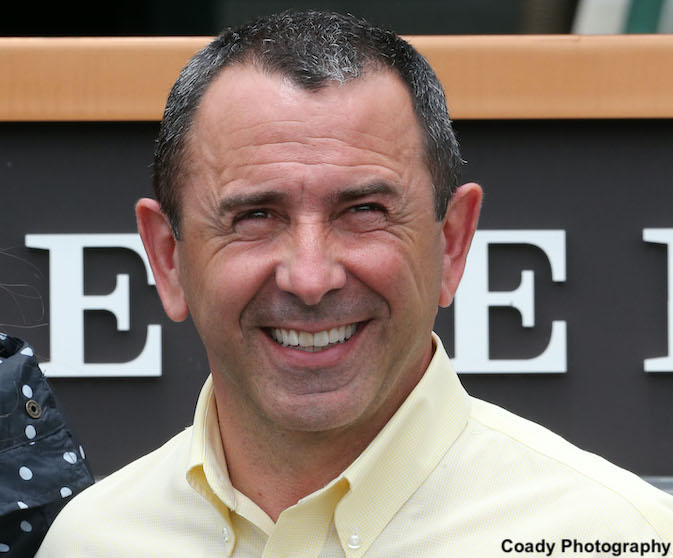 He came to this country at the start of 2001. At the time, he was the American outpost for a Brazilian owner who had bought five yearlings out of the Keeneland September Yearling Sale in fall 2000. One of the five was a filly Lobo said he knew was special from the start.

“She was an exceptional filly,” he said. “Since the beginning, since when I started to breeze them, she was very precocious. She won first time out at Del Mar at a mile, very impressively. The first half-mile, when she worked for me, I was very pleased with her.”

That bay filly turned out to be Farda Amiga, would win the 2002 G1 Kentucky Oaks and G1 Alabama before finishing second in the Breeders’ Cup Distaff that year. She won the 2002 Eclipse Award for Champion 3-Year-Old Filly, giving Lobo a red-hot start to his American career. The next year, he had graded stakes winner Quero Quero in his barn, who brought him a win in the G2 Honeymoon Breeders’ Cup Handicap and seconds in the G1 Milady Breeders’ Cup Handicap, G3 Wilshire, and G3 Las Cienegas. Another year later, he brought Pico Central (BRZ) over from South America and developed one of the most dominant sprinters of the 2004 season, recording G1 victories in the Carter and Metropolitan Handicaps and Vosburgh Stakes in New York and G2 San Carlos Handicap in California.

A trainer simply couldn’t hope for better advertising at the start of their career than three horses competing in the graded stakes levels so convincingly.

“Even in my best dream, no [I couldn’t have imagined that start]” he said.

Lobo trained in California and in New York before transitioning to his current base in Kentucky. Since many of his clients still have ties to South America’s racing and breeding industry, he’s accustomed to taking horses like In Love who start their careers south of the equator and are asked to transition to America. He said there’s no real pattern to finding out which South American imports will succeed in the States and which won’t, and there isn’t a particular track or circuit that seems inherently better at helping them make the transition.

Most of the time, Lobo said the trainer or manager in Brazil will tell him which horses on a plane load they think is the most talented on their home turf, but Lobo has found it could easily reverse once they step onto American soil. The lesser of two competitors could thrive while the other may struggle with the tighter turns and fizzle. It takes Lobo four or five months to really know what he’s got.

“The transition is not easy,” he said. “Some really good horses, sometimes they don’t ever show up. It happens.”

In Love, Lobo said, was one who came to him with a respectable, if not dazzling resume at home, and then took some time to settle in. He was from the same crop as Imperador and Ivar, and they were all turned out together when they were young. The trainer who sent Lobo the horse had the highest hopes for In Love, but it took him some time to validate that faith.

Although he won an allowance at Keeneland impressively last year, In Love ran relatively disappointing races in the next three starts. Lobo took him to Arlington Park in search of friendlier competition and noticed the horse dawdled on the lead, focusing on his competitors to his inside instead of the wire. Lobo added blinkers and saw a big improvement with a victory in the TVG Stakes at Kentucky Downs one month prior to the Turf Mile.

True to the horse’s name, Lobo said In Love is a kind soul around the barn, making his job easier. He feels good about the horse’s chances in the Breeders’ Cup Mile. If anything, he thinks In Love could be just as happy running farther – someday.

“He’s bred for more distance, this horse,” he said of the son of the Sunday Silence stallion Agnes Gold. “No doubt about it – he can go a mile and a quarter, even a mile and a half. But he’s working well this way, let’s keep it this way.”

The Huge Gamble That Paid Off: Remembering The Inaugural Breeders’ Cup