It may have been more than a decade since Jim Ryerson has had a graded stakes winner in his barn, but he certainly hasn’t forgotten what to do with one. The 4-year-old filly Miss Marissa proved that fact decisively with her victory in the Grade 2 Delaware Handicap on July 10.

“You have to train the horses that you have and you try to do the best you can for the owners that you have,” Ryerson said of the in-between years. “Then at times a nice one comes along, I think we have an idea of what to do with them when we get them. But if you should ever think that it’s a given to always have nice horses in the barn, you’re in the wrong business!”

With the filly now pointing to the Grade 1 Personal Ensign near the end of the Saratoga meet, 68-year-old Ryerson is remembering to savor the experience along the way.

The trainer had to take his time developing Miss Marissa for owner Alfonso Cammarota, to whom Ryerson was recommended by Frank and Patricia Generazio three years ago. A New York-bred daughter of He’s Had Enough, Miss Marissa needed four starts to break her maiden as a 2-year-old, then the pandemic last year caused major interruptions in the first half of her 3-year-old season.

Miss Marissa really started to put it all together last July, winning an allowance race at Ryerson’s old stomping grounds of Monmouth Park to kick off a three-race win streak that culminated in the G2 Black-Eyed Susan at Pimlico in October.

“That all followed stretching her out to two turns, which really helped her,” Ryerson explained. “She then ran a pretty good second in the Ladies (Handicap) in January, got beat by a filly of Todd (Pletcher’s), and I didn’t think the track was to her liking at all that day. We had made up our minds to give her a break after that, and she’s come back very well.”

After a five-month layoff, Miss Marissa ran second to Dream Marie in the listed Obeah Stakes at Delaware on June 9, then stepped up to capture the G2 Delaware ‘Cap a month later by 1 ¼ lengths.

“You like to see a filly progress from three to four – she’s gonna have to run faster and all – and I think you can see signs that she’s doing that,” said Ryerson. “You have Letruska, Swiss Skydiver, some other fillies that ran a good bit faster than her last year, but she’s narrowed the gap. I think she has controlling speed, she’s not one-dimensional where she has to have the lead, but she can carry her speed and there aren’t a lot out there that have done that.” 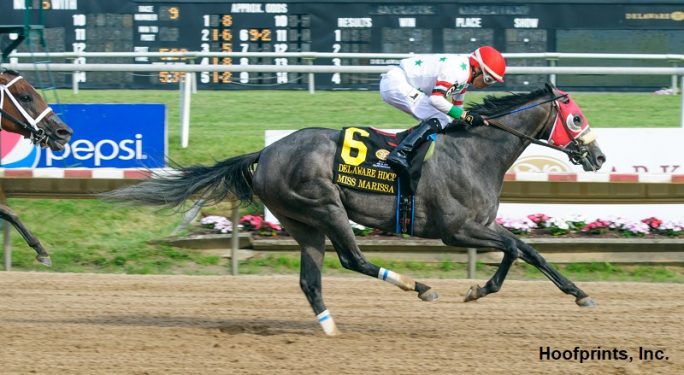 He acknowledges that the Personal Ensign will be a big step up in class, but Ryerson thinks Miss Marissa is capable of continuing to progress in what will be her third start off the layoff.

“We’re stabled here (at Saratoga) and she won here last year, so that goes into it,” the trainer explained. “I think her effort in the Delaware Handicap puts us there. It’s a pretty big jump but I think it’s time to try and make it, and we’ve got about six weeks to get ready for that.”

The Personal Ensign is a “Win and You’re In” race which offers the winner an expenses-paid berth to the Breeders’ Cup Distaff this fall at Del Mar.

Should Miss Marissa earn a trip to the West Coast, it won’t be Ryerson’s first experience at the Breeders’ Cup. He saddled the winner of the Breeders’ Cup Juvenile in 1995: Unbridled’s Song.

Later a champion sire, Unbridled’s Song also won the 1996 Florida Derby and Wood Memorial before a well-publicized foot issue leading up to the Kentucky Derby. The colt wound up finishing fifth in the Run for the Roses.

“I haven’t had too many opportunities in the Breeders’ Cup, but this filly, looking at her going into this year, I think if she can win a couple this year, she can get herself in that discussion,” Ryerson said of Miss Marissa.

No matter how this season pans out, Ryerson has come a long way from the 15-year-old kid who walked onto the Monmouth backstretch looking for a summer job. He became a well-known figure on the New Jersey circuit for several decades, but made the decision to move his stable to New York full time about 10 years ago.

“I was looking for a place that I could continue doing what I love doing; because of the lost dates in New Jersey, there were a lot of opportunities lost in the state,” said Ryerson. “My wife and all my kids still live in Monmouth County, along with all our grandchildren, so it wasn’t an easy decision to make.

“My wife understands, but she stays there while I work in New York because it keeps her happy, and I then try to be the grandfather I want to be. You try to make the time. It’s not as much as I would like, of course, because it’s hard sometimes, but it’s doable.”

With 17 horses at Saratoga and another 13 at Belmont, Ryerson said he definitely still enjoys coming to work every morning.

“I know that I’m not getting any younger, but I love doing it and I think that I can offer clients a good option as a horse trainer. I’m probably as busy now, even though I don’t have a huge outfit, compared to five years ago, 10 years ago, so I think it’s been a good move (to New York).”

Besides, you just never know when the next good horse will walk into your barn.

Trio Of MATCH Series Stakes Carded For Saturday At Pimlico

‘I Wouldn’t Like It If It Were Easy’: Moquett Enjoys Challenges Of Training Strong-Minded Whitmore

‘Everything Has Been Positive’ With Juvenile Champ, Jim Dandy Favorite Essential Quality 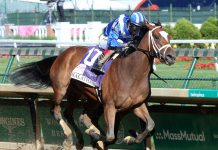