The tears flowed freely in the Churchill Downs winner’s circle last Saturday as single father Jason Cook embraced his 12-year-old daughter Peyton in the shadow of the Twin Spires on the first Saturday in May; the trainer had just saddled his first stakes winner in 25 years.

“I wanted to win that race because I wanted my daughter to experience that,” Cook said. “She cried for 45 minutes after the horse won. Everybody in that winner’s circle was in tears, not because it was that great or big a stakes, because it wasn’t. They could see how much it meant to my daughter.”

Among those tearing up were a number of Kentucky horsemen who stepped in to help Cook raise Peyton after her mother died nearly 10 years ago, including Ben Huffman, Steve Hargrave, and Greg James and his wife, among others.

“I’m glad for all those people to see her happy, everybody that’s helped me with her,” Cook said. “It’s amazing how many people have helped me with my daughter. When I’d go saddle a horse when Peyton was five, I’d drop her off in the racing office, saddle the horse, then I’d come get her and watch the horse run.

“Now that she’s a little older it’s a little easier, but every one of those people helped me get to where we are today.”

The winning horse was owner David Miller’s Three Technique, a $40,000 claim last November at Churchill. The 5-year-old son of Mr. Speaker burst clear late to win the $160,000 Knicks Go Overnight Stakes by a length at odds of 37-1.

Posing with her father after the winner’s circle photo, Peyton was interviewed by NBC. The footage was later played in her middle school classroom.

“It means the world to him,” she said. “He’s been trying to get this horse to win for a while! It was very exciting.”

Peyton was born seven weeks premature, weighing 2.2 pounds when she entered the world. When her mother, Tracey, went into labor in Louisville, Cook was in New Orleans, La., running horses at the Fair Grounds.

“They called me and said, ‘Peyton’s coming,’” Cook recalled. “I filled up the truck with gas, and then I drove straight through until I got to the hospital. I never stopped until I got here, and 45 minutes after I showed up, she arrived.”

Though Peyton’s weight dropped to 1.8 pounds before it rebounded, doctors said the little girl was healthy and had strong lungs; she just needed to grow. Cook and Tracey went to the hospital every day to feed Peyton for seven straight weeks until they could finally bring her home.

Unfortunately, it was about 45 days after Peyton was allowed to leave the hospital that Tracey was back in it.

“Her mother got sick pretty soon after she came home,” said Cook. “Tracey got septic 11 times in 22 months. It was horrible. We’d be in the hospital for 80 days at a time, and we set up a hospital bed for her on the first floor of my condo. She’d come home, it’d look like it was going good, then two weeks later she’d start running a fever and have to go back to the hospital.

When Peyton was just 2 ½ years old, Tracey succumbed to sepsis.

“She would get up at four in the morning and do 150 push ups, 150 sit ups, and then run a few miles,” Cook said of Tracey. “She was the healthiest person I knew, ate more vegetables and salad, she rarely ate red meat. It was just crazy. It was so hard.”

The son of Kentucky Oaks-winning jockey Lois “L.C.” Cook (Lori-El, 1957), Jason Cook had never known any life but the racetrack. He got his first “official” job on the track at 13 years old, earning $2 a head to walk hots. He galloped horses as soon as he was old enough, and spent every morning following his father to the racetrack.

Cook bought his first car at 16 years old with the $8,000 cash he made betting on a race. His mother, a schoolteacher, just shook her head.

“They let us run wild,” Cook said, laughing good-naturedly. “I wasn’t ever in no real trouble, but I was trouble enough.”

At 17 years old, Cook took out his trainer’s license. He recorded his first winner two years later with a $4,000 claimer at Churchill Downs.

“Until I started training I thought it was the easiest job in the world,” said Cook. “Well, I won some races, and had some good years and bad years, that kind of thing.”

Cook won four stakes races early in his career, from September 1996 to May 1997, but there were 11 of the next 25 years that saw him win two or fewer races. Thankfully, Cook also owns an equine hauling company that helps make ends meet.

Still, after Tracey’s death, Cook found it hard to balance his passion for horse racing with caring for his daughter. His own grief must have also played a role, but Cook never gave up on his dreams.

“Nobody wanted to race at Turfway Park back when the purses were so bad, so it hurts your business a little bit to have to stay here in the winter,” Cook explained. “Plus, two evenings a week we’re at soccer practice, and on Saturdays I’m at a soccer game. I’m literally a soccer mom! I look up sometimes, and I see five kids and their parents all swimming in the pool while I’m grilling out, and I just think, ‘I don’t know how all this happened.’

“Doing this job …  owning a hauling company, training horses, and having a kid, it’s sometimes almost impossible. You can’t do this job full time and raise a daughter, and that’s why I don’t hustle more horses than I have.

“But if you just keep grinding, and keep believing something is going to happen, it can happen.”

Reflecting on claiming the horse last fall, Cook recalls that he and owner David Miller had tried to claim a different horse, but had lost the “shake,” or random draw that occurs when more than one claim is sent in for the same horse. Miller pointed out Three Technique in the program, and Cook loved what he saw.

“I thought he almost looked too good to be true, like they’re giving up on this horse a little quick,” Cook remembered. “There was a long line of people waiting to drop claim slips, and after the race, they started naming off all the people that were claiming and it took nearly 10 minutes.”

Officially, there were 27 owners and trainers willing to spend $40,000 for Three Technique that day. Cook was shocked when the racing official called his name as the trainer who’d won the draw.

“David, he believes in karma,” Cook said. “When I first started training him, when I watched him gallop that first day, I thought, ‘Man, he goes like a nice horse, just has a lot of pride in the way he carries himself. He’s classy. Man, this is unbelievable to claim a horse like this for 40.’ Every day I liked him more.”

Over the winter, Cook ran the horse several times at Turfway Park on the synthetic. Three Technique always ran hard, the trainer said, but he just didn’t seem to relish that surface and his best finish was a third-place effort in the listed Forego Stakes.

Once the training center at Churchill reopened in the Spring and Cook was able to resume training Three Technique on the dirt, the horse really thrived. Cook was disappointed when Three Technique ran sixth in the Grade 3 Commonwealth Stakes at Keeneland in April.

“That was kind of my fault for not really pointing to that race, because we weren’t sure if we’d want to run him there,” Cook admitted. “Then he got left at the gate and was beaten five lengths for everything.”

Coming into the Knicks Go, Cook was much more confident.

“It was like he was training so good and doing so well, I told people, I said, ‘He won’t get beat,’” Cook said.

Even though he approached the race with strong faith in his horse on the day, Cook was still emotional after the victory.

“Today is the day if there was ever a day,” he said.

As for Peyton, she’s unlikely to follow her father’s footsteps in the racing business.

Cook explained: “She likes the horses, but somebody asked her one day if she wanted to be a trainer and she said, ‘Gosh no. I want to be a neurosurgeon.’ She’s very put together for a 12 year old!

“She’s a good kid. She does housework, the laundry, she’s up at 5:30 every morning to cook her own breakfast, asks me if I want breakfast, then makes her own lunch and gets ready for school. She’s done that for three years now.

“I guess because her mother isn’t here, and because my life sometimes gets quick, she’s had no choice and she’s had to be somewhat grown up. But it’s give and take. You know, with my job, she does have to sacrifice certain things day-to-day, but she does get some advantages, too. There aren’t many kids getting to travel around as much as she does. We’ve been to DisneyWorld eight times, and we’ve been almost everywhere in the country together.

“Peyton looks just like her mother. I see so much of her mother in her.” 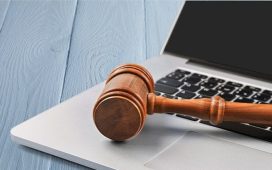 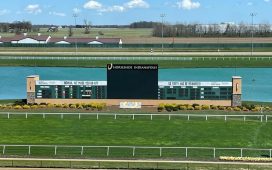 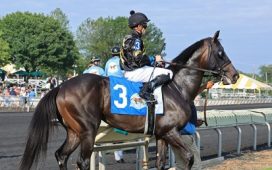 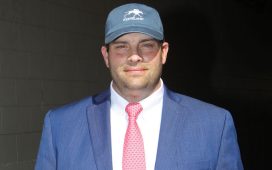 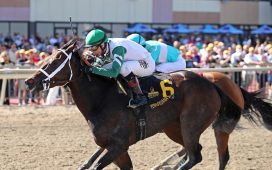 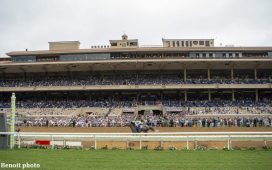 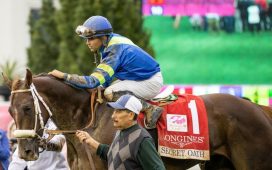