A wave of Saharan dust is set to hit Britain later this week – which together with drizzle forecast on Friday could result in ‘blood rain’ over parts of the UK.

New satellite imagery from the European Space Agency (ESA) shows a huge plume of Saharan dust making its way across the Atlantic Ocean to the Caribbean.

The plume is expected to reach the Lesser Antilles and Puerto Rico on 16 and 17 May respectively, according to the ESA’s Copernicus Atmosphere Monitoring Service (CAMS), which monitors dust transport from the Sahara Desert every year.

It is also predicted to hit the Iberian Peninsula and western Europe on 20 and 21 May, with some of the plume reaching the South East of England on Friday morning.

‘Most of the dust transport is likely to be at higher altitudes which could lead to hazy skies rather than impacts on surface air quality,’ Mark Parrington Senior Scientist for CAMS told MailOnline.

‘It may also be mixed with some rain, which is also forecast for Friday, so there could be surface deposits on cars after the rain has cleared.’

The news comes after another huge plume hit western Europe in mid-March, turning skies an eerie shade of orange and covering cars and windows in a layer of fine red dust. 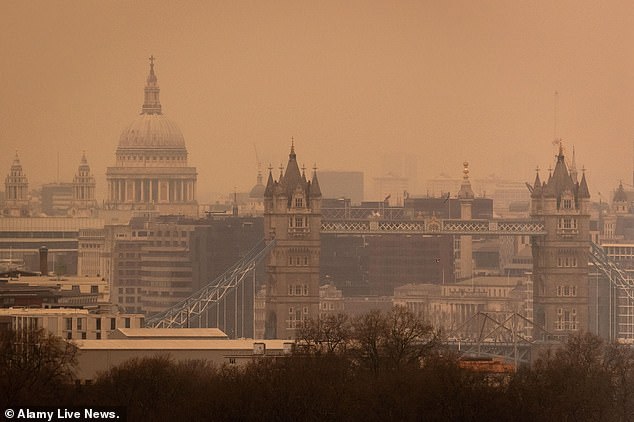 The Saharan dust cloud turned skies over London an eerie shade of orange in March.The next one is expected to reaching the southeast UK during the morning of 20 May 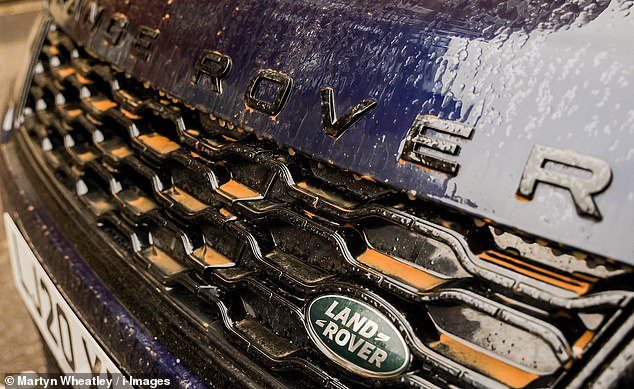 Saharan dust deposited over the front of a Range Rover in March. Vehicles across the UK have been hit with unwelcome the dusty deposits

How does Saharan dust get to the UK?

As in other parts of the world, the wind can blow strongly over deserts – whipping up dust and sand high into the sky. If the winds in the upper part of the atmosphere are blowing north, the dust can be carried as far as the UK.

Once it is lifted from the ground by strong winds, clouds of dust can reach very high altitudes and be transported worldwide, covering thousands of miles.

In order for the dust to get from up in the sky down to the ground, you need something to wash it out of the sky – rain. As raindrops fall, they collect particles of dust on the way down. Then when the raindrops land on something and eventually evaporate, they leave behind a layer of dust.

CAMS scientists said this year has shown – and continues to show – higher than normal levels of dust transported across the Mediterranean and parts of Europe.

‘The source of the dust in the atmosphere is dependent on the wind patterns over the Sahara and this has been driving the sources of the events we have been monitoring this year,’ said Parrington.

‘Typically, the most active season is spring, but the conditions have been favourable for Saharan dust transport since the beginning of the year.’

Dust plumes occur when strong winds whip up sand and other organic sediment from the deserts and send it into the troposphere – the lowest portion of the Earth’s atmosphere.

This is transported towards the Caribbean following trade winds in the spring, summer and early autumn, when the Saharan Air Layer forms, crossing the Atlantic with very dry, dusty air masses.

Early spring is the most active period for Saharan dust transport into Europe.

As the dust in this case is likely to be at higher altitudes, it is unlikely to have a significant impact on air quality at the surface, according to Parrington.

However, CAMS identified ‘very high values of aerosol’, which can reduce the amount of sunlight reaching the ground.

It could also result in ‘blood rain’, which occurs when relatively high concentrations of red-coloured dust or particles get mixed into rain, giving it a red appearance as it falls.

Parts of the UK were hit by a Saharan dust cloud in back in March, with cars across the south pictured covered in fine red dust.

The dust cloud had travelled up from Europe, with skies turning orange in parts of southern Spain, where peak dust concentrations beat previous records.

The plume reached as far as Scandinavia the following days.

Drought conditions and desertification associated with global warming can increase the amounts of dust in the troposphere, while unsustainable water and land use also lead to increased amounts of dust, according to CAMS.

Saharan dust can also transport microorganisms, including pathogens – although there is no evidence of human infectious diseases caused by pathogens being transported on long-distance dust plumes.

However, it can cause diseases on the Caribbean coral reefs. 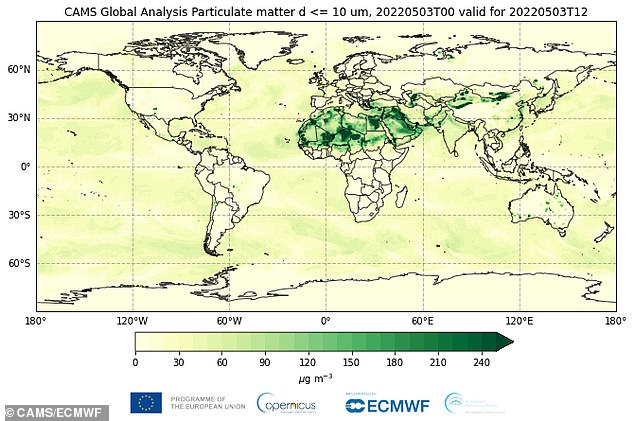 WHAT IS THE SAHARAN AIR LAYER?

The Saharan Air Layer is a mass of very dry, dusty air that forms over the Sahara Desert during the late spring, summer, and early fall.

It moves over the tropical North Atlantic Ocean every three to five days.

Saharan Air Layer outbreaks usually occupy a 2 to 2.5-mile-thick layer of the atmosphere with the base starting about 1 mile above the surface.

The Sahara isn’t the only source of dust clouds – the so-called dust belt goes from the Chinese and Mongolian Gobi Desert to the Mauritanian coast.

Northern Africa is the main global source, counting for around 50 per cent of the dust emissions followed closely by Asia with a 40 per cent, especially coming from the Middle East and Central Asia according to a recent survey.

Only today, a sandstorm descended on Iraq, sending at least 2,000 people to hospital with breathing problems and leading to the closure of airports, schools and public offices across the country.

It is the eighth duststorm since mid-April to hit Iraq, which has been battered by soil degradation, intense droughts and low rainfall linked to climate change.

The last one earlier this month led to the death of one person while 5,000 others had to be hospitalised for respiratory problems.

On Monday a thick cloud of dust enveloped the capital Baghdad in an orange glow and blanketed many other cities including the Shiite shrine city of Najaf to the south, and Sulaimaniyah, in the northern Kurdish autonomous region, AFP correspondents said.

Yellow and orange sand covered building roofs, cars and even crept into homes. 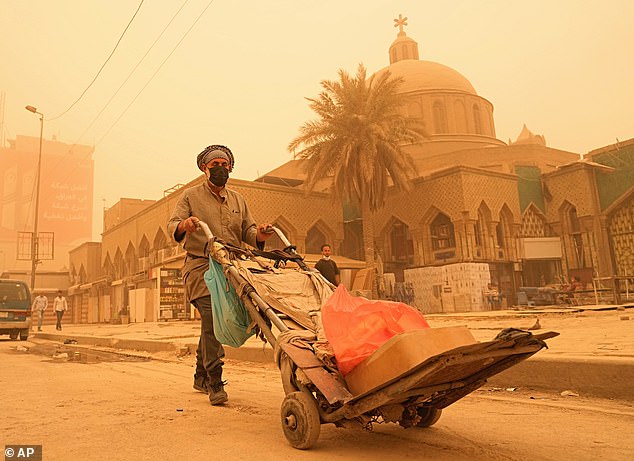 Asandstorm descended on Iraq today , sending at least 2,000 people to hospital with breathing problems and leading to the closure of airports, schools and public offices across the country. Pictured: a man pushes a cart during a sandstorm in Baghdad, Iraq 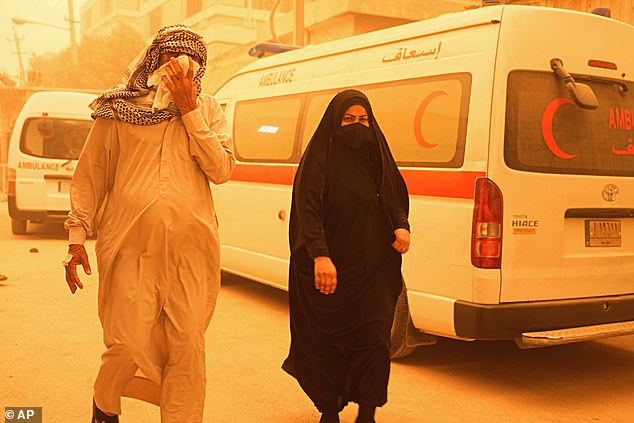 It is the eighth duststorm since mid-April to hit Iraq, which has been battered by soil degradation, intense droughts and low rainfall linked to climate change. Pictured: People walk on a street during a sandstorm in Baghdad

Authorities in seven of Iraq’s 18 provinces, including Baghdad, ordered government offices to shut.

But health facilities remained open to assist those most at risk, including the elderly and people suffering from chronic respiratory diseases and heart ailments.

By midday at least 2,000 people were admitted to hospitals across Iraq in need of oxygen, said health ministry spokesman Seif al-Badr.

‘The dust transport event from the Sahara is not directly affecting the current sandstorm in Iraq, which has a more local source,’ said Parrington.

‘The air quality impacts in that case are much more severe, as the sand is staying close to the surface and directly impacting on large population centres.’

WHAT IS BLOOD RAIN?

It happens when relatively high concentrations of red coloured dust or particles get mixed into rain, giving it a red appearance as it falls.

Blood rain is not actually a meteorological or scientific term – instead it’s a colloquial phrase which can be found going a fair way back in history. With that in mind, there’s no set definition for the term.

How does blood rain happen?

The forces that drive our weather can be quite powerful and do some surprising things – including lifting things like sand or even small objects and transporting them large distances.

In the case of blood rain, strong winds or storms can whip up dust and sand. As this becomes airborne it can get caught up in atmospheric circulation, where it can be carried for thousands of miles.

Eventually the dust will either fall out of the sky due to gravity or will be caught up in rain clouds, where it mixes with the water droplets. When these fall as rain the raindrops could appear red.

How often does blood rain happen?

Documented cases are few and far between. In 2001 in the southern Indian state of Kerala, monsoon rains periodically fell with a red colour which was dark enough to stain clothes. There were also reports of rains of other colours during the same monsoon season – including green and yellow rain.

There are other, much earlier mentions of blood rain – even stretching back to Homer’s Iliad, the epic poem which describes the siege of Troy which is thought to have been written around the 8th Century BC. It was, perhaps unsurprisingly, seen as a bad omen.

Do we get blood rain in the UK?

These days, in the UK at least, the term blood rain seems to be used much more loosely than the grandiose term would suggest.

Each year on several occasions the UK will see rain falling with some amount of dust mixed into it. This usually comes from the Sahara before mixing in clouds and falling out.

However, the dust we see is usually yellow or brown and mixed in very low concentrations – so the rain would look just the same as usual. The only difference would be that you might find a thin film of dust on your car or windows after the water has evaporated.

So we rarely if ever see ‘proper’ blood rain here in the UK, despite what the media headlines may suggest. 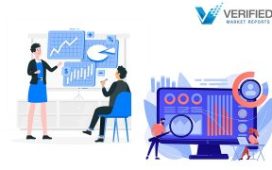