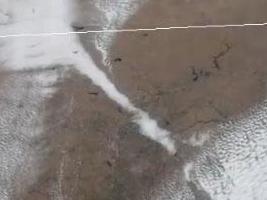 Leigh Marts was on her way from St. Louis to Phoenix on Wednesday when she spotted something unusual out the window of her Southwest Airlines flight: a narrow strip of white, flanked by bare grass, lay painted across the Kansas prairie below.

A similar sight was seen above Hutchinson, Kansas.

Weather satellites confirmed the bizarre feature, which highlights the meteorological caprice that can give rise to such narrow swaths of snow. More than a foot of snow fell in the band, which was 10 to 15 miles wide in places. Just a few miles on either side, there were hardly flurries.

The thin stretch of intense snow was oriented northwest to southeast, passing through parts of Russell, Lincoln and Ellsworth counties in Kansas. The snow persisted toward Cottonwood Falls and Marion.

Flight data shows that Marts’ flight crossed over Interstate 70 heading west-southwest in the vicinity of Wilson and Dorrance, Kansas, a 15-minute car ride east of Russell and about 40 minutes northeast of Great Bend. Waconda Lake, just west of Beloit and Glen Elder, is visible in the distance.

Meteorologists have long vented about the challenges of prediction when it comes to difficult winter storm forecasts. But Tuesday’s hyperlocal snow band was a step beyond what most Great Plains forecasters are accustomed to.

Snow bands such as this are generated by processes on the mesoscale, or local, level. That means that unlike with large sprawling storm systems that can be spotted by weather models days in advance, it’s often impossible to predict snow totals until the flakes are flying.

Integral to its formation was convergence, or the gentle collision of two air masses at the surface. The “pileup” of air causes it to rise, blossoming into a band of heavy snow showers. That can also cut back on precipitation outside the band, since air exiting the clouds is likely to sink and choke off any snowfall on either side of the axis of best convergence.

The National Weather Service in Wichita did issue a winter storm warning once it became apparent that snowfall amounts would reach warning criteria.

Hyper-localized swaths of snow are a common occurrence within lake-effect snow bands; amounts taper off quickly outside the lone, stout snow band.

One such band brought 88 inches of snow to parts of Erie County, New York, on Nov. 15-21, 2014. More than five feet fell east of Buffalo between Nov. 17 and 19. Several feet of snow fell at the intersection of Transit Road and Walden Avenue in Depew, while Genesee Street, two miles to the north, saw only a couple of inches.

'A summer unlike any other': heatwaves and Covid-19 are a deadly combination

SpaceX Launch of NASA Astronauts Is Postponed Over Weather

Tropical Storm Bertha Could Cause Dangerous Flooding in the South

Will Hot Weather Kill the Coronavirus Where You Live?

Super Cyclone Bears Down on India and Bangladesh

Arthur, the First Named Storm of the Hurricane Season, Forms

Typhoon Vongfong Heads Toward the Philippines

The Night the Lights Went Out in Nashville

‘Nerve-Racking and Very Unusual’: Snow in May Worries Growers