Josh Allen spun the football Sunday like Shakespeare wielded a quill, artistically and masterfully feathering passes deep and short and across the middle and down the sidelines, to receivers, running backs and tight ends.

With 13 minutes left in the first half, Allen had completed passes to seven targets. By the time he connected with an eighth, the Buffalo Bills were ahead 21-0 and in the red zone, about to embarrass the New York Jets some more.

Variety, accuracy and the Bills’ overall crispness were drowning the Jets’ alleged strength: Gregg Williams’ aggressive-minded defense. Allen also had run effectively, scrambling some but mostly on plays that asked him to tuck and dash.

And yet it grew harrowing to watch Allen run as the second quarter wore on.

About 10 minutes into the…

‘I felt it going in’: For Nuggets, a gallant Nikola Jokic game, a piercing loss

Swagger, belief and the spirit of Kobe: How Anthony Davis made his ‘Mamba shot’ 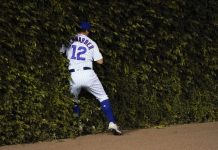 David Ross benches Kyle Schwarber, singling out a Cubs player who can handle it

Seven observations from the Bills’ win: Is Josh Allen turning into a star?

[Sports Gab Network: Redskins Gab] – Back To The Drawing Board 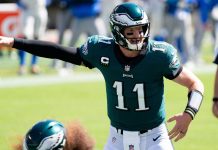 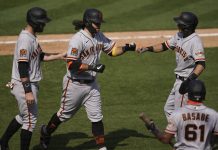 Giants power their way back to .500 and hope to make a final push at home