Love him or hate him, Microsoft co-founder Bill Gates has come out with a statement that most hard-working Americans and investors will agree on–cryptocurrency is based on The Greater Fool Theory, similar to what other respected investors have been saying for years.

Speaking at a TechCrunch talk on climate change on Tuesday, the 66-year-old billionaire said he thinks cryptocurrencies and NFTs are “100%” based on the greater fool theory.

Gates’ view is similar to legendary billionaire investor Warren Buffet. In April, Buffet said in an interview that he wouldn’t take bitcoins if they were offered to him at $25 per bitcoin. Buffet added that bitcoin has no intrinsic value and that cryptocurrency “doesn’t produce anything.”

Gates described the crypto and NFT phenomenon as something that’s “100% based on greater fool theory,” referring to the idea that during a market bubble, one can make money by buying overvalued assets and selling them for a proﬁt later because it will always be possible to ﬁnd someone (The Greater Fool) who is willing to pay a higher price. 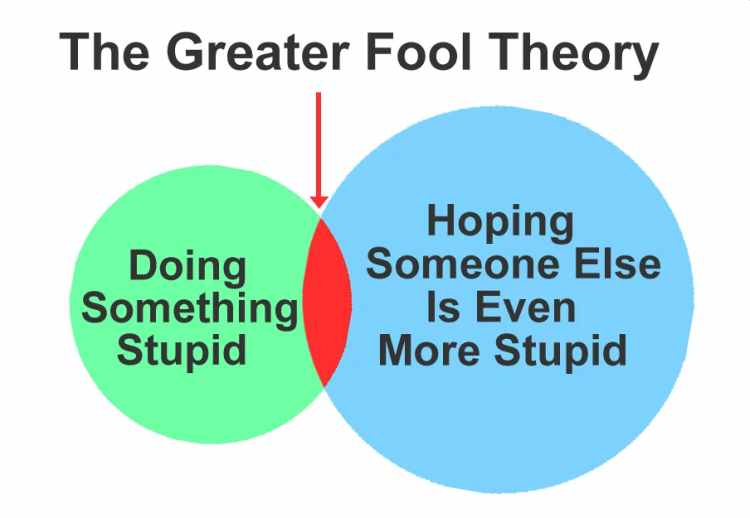 NFTs are tokens that can’t be exchanged for one another. They’re often touted as a way to prove ownership of digital assets like art or sports collectibles. “I’m used to asset classes … like a farm where they have output, or like a company where they make products,” Gates said.

As for crypto, “I’m not involved in that,” Gates added. “I’m not long or short any of those things.”

Gates is not alone. Late last year, Gravel Institute did a documentary on Bitcoin, calling it ‘a scam’ similar to a Ponzi scheme. In the video narrated by Doug Henwood, a writer, economist, and author of Wall Street, Henwood likened Bitcoin to an Italian swindler and con artist named Charles Ponzi.

Today, Ponzi has become synonymous with an investment scam where investors are promised substantial returns. Operators of the Ponzi scheme keep their fraud going by luring new clients. Once new investors put their money into the scheme, the money is then collected and used to pay the original investors as “returns.”

Henwood describes Bitcoin as a digital token with no physical or government backing, that’s run by a global decentralized network of computers, Henwood said all of the stuff you hear about “peer-to-peer technology” and “the blockchain” really only explains how Bitcoin works like a currency.

“But despite the name, Bitcoin is not really used much as a currency at all. When people buy Bitcoin, they rarely use it to buy goods and services. They’re really buying access to a Ponzi scheme. Only 1.3 percent of Bitcoin’s economic activity is in merchant transactions. The rest is speculation – people buying it just because they think it will go up.”

Meanwhile, the price of the world’s most popular cryptocurrency fell as low as $20,111 in early trading today before bouncing back up later in the afternoon.

Below is Doug Henwood’s video about bitcoin truth.