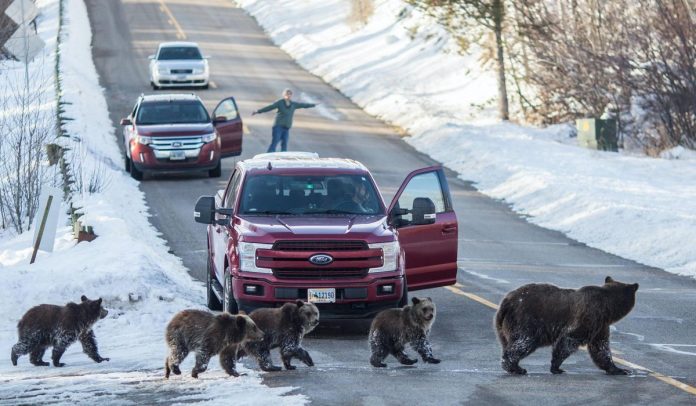 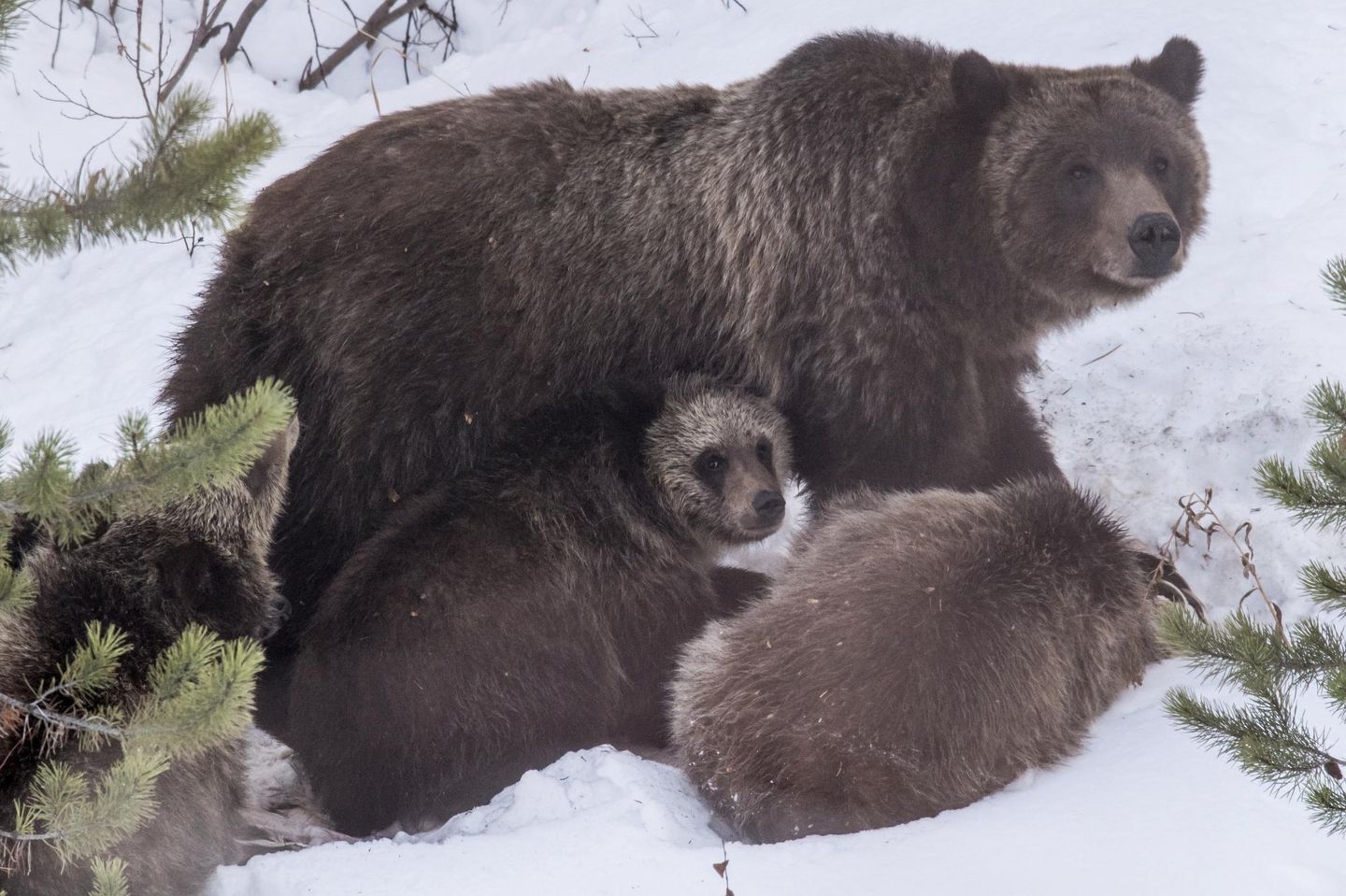 JACKSON, Wyo. (AP) – Bear biologist Mike Boyce was staked out on a road in south of Wilson for much of the day on Nov. 17 keeping tabs on five grizzly bears that were napping, playing and feeding on a deer carcass.

“They devoured it in just a matter of a couple hours,” Boyce said from the scene.

For three weeks and running this has been what the Wyoming Game and Fish Department employee’s workdays look like: keeping tabs on grizzly 399 and her four cubs, spreading the word of their whereabouts and trying to keep both people and the bears out of harm’s way.

“I’ve been on this full time,” Boyce told the Jackson Hole News & Guide. “Since they left the park – when was that?”

Grizzly 399, he recalled, first ventured south the last week of October. The 24-year-old bear did go back north to her normal territory in Grand Teton National Park, but her detour to familiar terrain lasted a single day. The valley’s most well-known wild animal has recently been living in the southern valley near ranches and subdivisions.

Mostly her stay has been conflict-free. But the change in habitat has taken a potentially perilous turn recently as grizzly 399 has started to key in on human-related foods.

“Here’s a bear that’s long habituated to being around people,” he said. “Now she’s in a new area that has different food sources, and some of those food sources are associated with human and residential activity.”

The three known types of unnatural sustenance that bear 399 has obtained are honey from a beekeeper’s hives, a grain mix meant for livestock and a residential compost pile. The sow grizzly and her large litter took advantage of all those foods over the last week to 10 days. Two of the three “food rewards” received were significant.

“They were on beehives for at least two days,” Hovinga said. “They pretty much cleaned up all the food that was available.”

Nobody was around to interrupt the behavior, he said, which persisted until the apiarist’s colony had been wiped out.

When the grizzly family found the pelleted livestock grain they gorged for about an hour. Boyce arrived, fired firecracker-like “bird bombs” to scare the bears off – and it worked.

The compost pile was raided at night in the southern valley. The grizzlies’ tracks told the story of what happened.

In the aftermath of all incidents, Boyce worked with the landowners to “secure the attractants.” Any subsequent attempts to access the foods were deterred.

Still, the five grizzlies remain in the area and the adage “a fed bear is a dead bear” often rings true. Grizzly bears are intelligent animals that dutifully return to what works to pack on calories. In this case it’s a food supply in backyards and areas that aren’t ideal for humans and grizzlies to coexist. Often the behavior isn’t tolerated by wildlife managers, who haze, relocate or kill the animals to reduce the hazard.

It’s unclear whether there’s a plan to address the famous family group of grizzly bears that has been exploiting human-related foods. The state of Wyoming, Hovinga said, is taking its cues from the U.S. Fish and Wildlife Service, which has jurisdiction over grizzly bears, classified as “threatened” under the Endangered Species Act.

An interview request with the Fish and Wildlife Service was declined, and a statement the agency was preparing was not conveyed by press time. Grand Teton National Park officials also declined an interview for this story.

Hearing news of her troubles on Nov. 17, longtime grizzly 399 photographer and advocate Tom Mangelsen was disheartened.

“That’s not good,” he said. “The beekeeper needs to take responsibility for leaving honey out that the bears might find. Same thing with compost.

“You can’t just have stuff out,” he said, “and expect the bears to not find it and eat it.”

Lorna Miller, a longtime wildlife advocate, was also bummed to learn of the development in grizzly 399’s sojourn. In her view, the community failed.

“That’s really discouraging, but it was almost inevitable,” Miller said. “One of the myths of Jackson Hole is that we take great care in being proactive on wildlife issues. We have the regs, but we don’t enforce them.”

Most of the privately owned areas where grizzly 399 has spent the month of November fall within Teton County’s bear conflict priority zones, where bear-resistant trash cans are required, restaurant grease must be secured and special bird feeder rules are in effect. Enforcement has been minimal, but wildlife advocates and managers say the zoning rules have still worked to curb conflict. As they’re written today, the regulations do not address beehives, livestock feed or compost.

Only time will tell how grizzly 399’s precarious situation shakes out.

Rafter J Ranch residents Deb and John Kuzloski spent part of their day on Nov. 17 enjoying a nearly exclusive viewing, watching through binoculars and spotting scopes as grizzly 399’s cubs roughhoused and tugged at a stripped-down mule deer carcass while their famous mother lounged under a spruce tree. The scene was “amazing,” John said, but also worrisome because of its location.

“I hope this is not her demise,” he said. “Why is she doing this? I think what we’re observing, although at the microscopic level, is how the occupied habitat expands – but that’s just my wild-a(asterisk)(asterisk) speculation.”

Hovinga pointed out that although grizzly 399 is in a new and concerning area, she’s acting like herself.

“It’s not like she’s learning a new behavior, she’s just foraging for what’s available,” he said. “These are bears trying to make a living in a residential area. There is different food on the ground.” 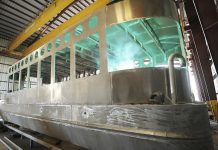 Florida attraction to get glass-bottom boat for wheelchairs

‘In the Aftermath’ of COVID: NC poet finds strength, hope 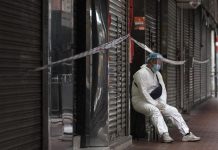 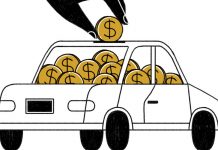 Auto Insurance During a Pandemic 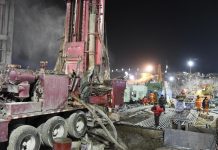 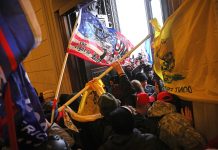 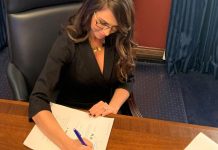 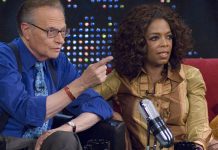 How Newsmakers and News Hosts Are Remembering Larry King

An iconic Alabama steakhouse and the woman who keeps it up