Sealiway, trained by Frederic Rossi, exercises in preparation for the Breeders’ Cup Juvenile Turf at Keeneland 11.03.20.

Ridden out by race-day jockey Mickael Barzalona on Wednesday morning at Keeneland, Breeders’ Cup Juvenile Turf hopeful Sealiway continued to draw eyes as he galloped over the main track. The 2-year-old son of young stallion Galiway (a half-brother to multiple G1-placed Silent Name) is listed at 8-1 on the morning line for Friday’s Grade 1 contest, but his jockey thinks the colt poses a significant threat.

Sold on the Deauville ring, he had easily won his first two races at Saint-Cloud and Chantilly, before finishing third in the listed Prix Roland de Chambure. He won again at Vichy in the listed Prix des Jouvenceaux and Jouvencelles, over seven furlongs, and was then second at ParisLongchamp in the Group 3 Prix La Rochette, without perhaps getting a clean run in the late stages of the race.

“He’s been a precocious colt from the very beginning,” Barzalona said. “I think he stands a very good chance.”

Rossi trains the colt over a sand-based course at home in France, so he’ll continue to train on the main track ahead of Friday’s race, since the composition is closer to what he’s used to. Barzalona will not be aboard Sealiway for any more morning gallops as his regular exercise rider will take over.

One concern might be the stretch out from seven furlongs to a mile in the Juvenile Turf, but Barzalona added that Sealiway doesn’t act as though the distance should be a problem. Drawn in the one-hole for the 14-horse field, Sealiway should be able to use his naturally forward running style to his advantage.

“I think I have a better shot with him than I had with Talismanic,” the jockey said, referring to his winning mount in the 2017 Breeders Cup Turf (at odds of 14-1).

Rossi was especially pleased with Sealiway after his massive triumph in the Prix Jean-Luc Lagardere, according to racingpost.com.

“I’ve always thought he was a really good horse and he ran over too short a trip to begin with,” the trainer said. “We decided to ride him more positively. He loves to dominate and you have to ride him more in the English style than the French. He doesn’t sprint, he’s a real steamroller.

“Before today he has never quite run the way he trained and I told the jockey I was pretty confident that if he could just do what he does in the mornings, the race would be over as a contest.”

Check out the replay of the Prix Jean-Luc Lagardere:

The Difference Between Sleep Deprivation And Narcolepsy In Horses

No Reversal By Ontario Government; Woodbine Meet Officially Over 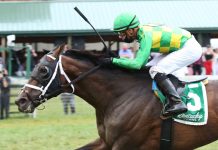 Hollywood Turf Cup: Can Oscar Dominguez Pull Off a Repeat?

$91,481 Carryover In Friday’s Stronach 5: Video Analysis By Tullock And Tukker