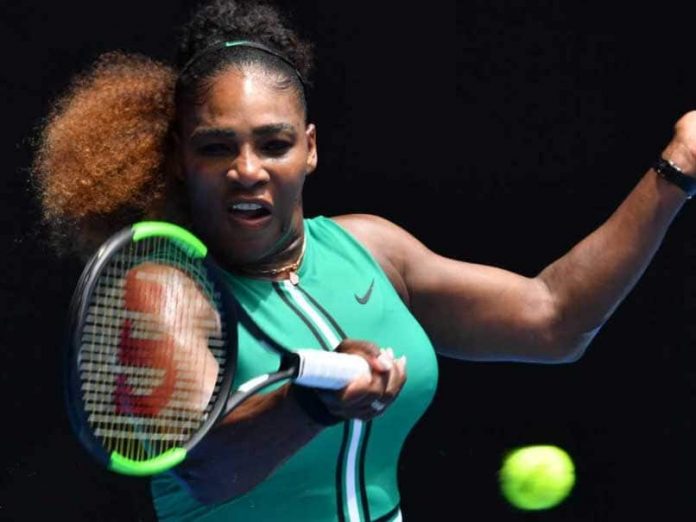 Sporting a striking jade green jumpsuit and fine mesh stockings on Rod Laver Arena, the 16th seed wasted no time in getting out of the blistering Melbourne heat and said it was good to be back.

“The last time I was here I was pregnant and playing at the same time which is insane,” she said.

“It’s weird walking back on, by myself this time, it feels good. I have so many memories from last time I was here.”

Bidding for an eighth Melbourne Park crown, few are betting against Williams despite her lowly seeding and she next faces Canadian Eugenie Bouchard who eased past China’s Peng Shuai.

Williams played at the mixed teams Hopman Cup in Perth this month, but her appearance on Tuesday was her first outing on tour since a meltdown in losing the US Open final to Naomi Osaka in September.

Unseeded, she booked a place in round two by beating 25th seed Mihaela Buzarnescu over three tough sets.

Seventh seed Karolina Pliskova, who has made the quarter-finals in her last two appearances at Melbourne Park, also went through, but 10th seed Darya Kasatkina slumped out to Switzerland’s Timea Bacsinszky.

American Madison Keys, who reached the semis at the French and US Open last year, as well as the quarters in Melbourne, ensured she too lived to fight another day, crushing local wildcard Destanee Aiava.

Like Williams, men’s world number one Djokovic is also gunning for a piece of history as he looks to win a record seventh Australian Open title.

Fourth seed Zverev, who is looking to win his first Slam title and establish himself as a serious threat to Djokovic, Roger Federer and Rafael Nadal, cruised past Aljaz Bedene 6-4, 6-1, 6-4.

“I’ve had about 86 injuries and the ankle is still a bit swollen,” said the 21-year-old.

“But I’ve done everything right in my preparation. Now I either play well or I don’t.”

He bravely fought on before calling it a day after winning just two of the next 17 games.

“I was trying to play but he was playing amazing tennis. I have to be happy that I didn’t lose today,” said a relieved Nishikori, who next faces Croat Ivo Karlovic.

The 2014 champion Stan Wawrinka also benefited from an opponent pulling out, with Ernests Gulbis calling it quits after hurting his back in the second set.

South Korea’s Chung Hyeon, a giantkiller last year when he beat Zverev and Djokovic on the way to the semi-finals, demonstrated his fighting qualities again, coming from two sets down to beat American Bradley Klahn.