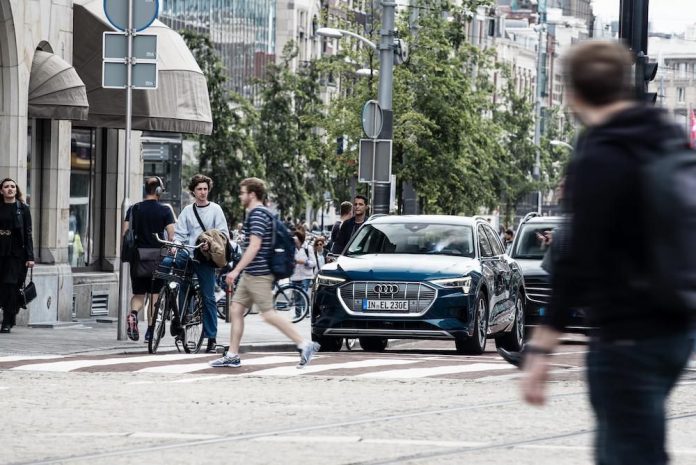 Earlier this month Audi revealed its most engaging electric car to date: the e-tron GT. This gran turismo is the pinnacle product in what is beginning to take shape as a considered family of tech-intense electrically powered polished premium cars. This first wave of electric cars, badged as “e-tron”, are not revolutions in shape and design. The radical rethink is promised down the line when customers warm to this new form of driving and when machine learning helps make all kinds of impossibilities, possible. For now, these early e-tron cars are more evolutionary. As head of design Marc Lichte recently told me: “Our approach is to use technology to create the most attractive cars.” Something that I’m about to experience.

My electric drive car for the week is the e-tron quattro 55. A mid-size sports-utility similar in proportions to the marque’s Q5, the car on test is a very different proposition to the sleek and sexy e-tron GT. Nevertheless it offers an insight to the marque’s approach to electrification. This car comes in two body shapes: this two-box classic SUV design and a raised coupé Sportback style. Later this year and before introducing the GT, Audi will market the smaller four-seater Q4 e-tron which also comes in a SUV and Sportback forms.

In terms of design, this e-tron quattro 55 looks pretty much like a standard modern Audi SUV with some electric drive signifiers, namely a partially covered grille and new rear light graphics. The difference is in how you experience the car. It is all very subtle requiring a little attention to notice the roomier interior which is clutter-free thanks to the absence of a conventional combustion engine. Five adults can occupy the e-tron comfortably and there is generous luggage space at the rear and also the front.

Audi has long excelled at interior design offering the right balance of digital and physical elements and this is no exception. On the e-tron the design theme is focused on visualizing the electric drive so almost everything in view is made to appear light. This includes the center console that hover in space. The e-tron comes with a digital gauge display and a large infotainment touchscreen that is slightly tilted towards the driver side of the cockpit for a sporty aesthetic. The graphics are clear and structured in such a way as to be easily experienced, which is essential with electric cars as there is simply so much tech to digest.

Except for the gentle hum of the tires and motors, electric cars are still inside with this e-tron’s body seeing extra soundproofing and sealing in the zones that would transmit noise interference. The 16 speakers and amplifier deliver up to 705 watts of power to enable the Bang & Olufsen 3D Premium Sound System to reproduce music in perfect reproduction and without any artificial effects. I happen to know all from a comprehensive lesson on the e-tron sound system when I drove a 2018 prototype onto the stage of the Royal Danish Playhouse in Copenhagen where singer-songwriter Tom Grennan performed live as I listened to his recordings from inside the car. My audio experience today isn’t quite the same — it consists of endless slow drives around London — but nevertheless the B&O performs impeccably.

To drive, electric cars are generally surprisingly fun and offer instant power. The 408ps e-tron quattro 55 on test feels lighter than its size and accelerates to 62mph in less than six seconds. The electric drivetrain comprises of 168 and 188 horsepower front and rear motors mated to a 95kWh battery pack which offers a range of 249-mile, with charging to up to 80% accessible in less than half an hour at a DC fast charger. Worrying about battery range is one of the main concerns with electric cars, but thankfully London seems to be getting more and more fast chargers, so we have few issues charging the Audi.

As a representative of the first wave of electrified cars, this e-tron SUV feels appropriate. It isn’t radically transformed enough to attract too much unwanted attention, yet has a high level of refinement and tech advancement to feel like we’re entering a modern form of transport. Lichte promises, as consumers ease into the idea of driving electric cars and as technology advances especially with AI and autonomous drive, the marque will be more daring in design.

“I’m working on a very exciting project that I cannot sadly discuss with you,” he told me on a recent video call. “It will be on the market in less than four years’ time and is based on a technology that will allow the car to be autonomous. AI completely changes the possibilities of the interior. It’s unbelievable what can be achieved,” he said enthusiastically. “This car has a radical new approach to design. It is the future.” It is a future many of us are impatient for.

Read my earlier interview with Audi head of design Marc Lichte and see Volkswagen Group’s other EVs including the VW ID.3.