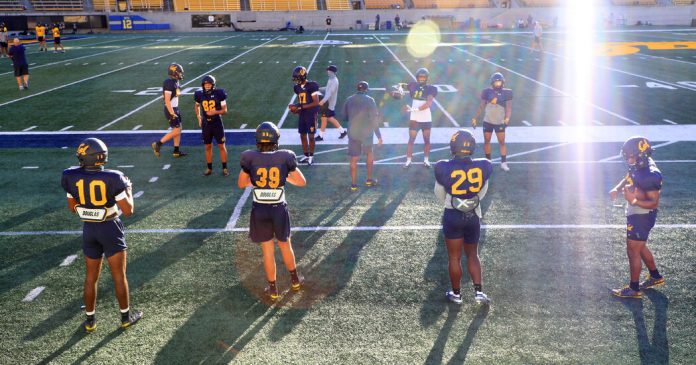 But the head coach wore a mask up to his eyes, looking like a Halloween mummy. Equipment managers sprayed inanimate objects with a disinfectant from a Ghostbusters-style backpack. And the afternoon shadows spread early, as they do in October, usually the middle of the season.

Scurrying among the players, coaches and support staff — their numbers limited by state and local health officials — was a 47-year-old named Andrew McGraw. He wore shorts and a touch of gray in his hair.

McGraw has spent 24 years with the Cal football program. As director of football administration, he oversees its day-to-day operations. His most important role this fall is to keep the coronavirus away from the team.

It is a personal mission. McGraw is a Covid-19 survivor. He was laid up, miserably, for two weeks this summer. Four months later, he says he still feels fatigued. His sense of smell is 60 or 70 percent of what it was.

He sees himself as a cautionary tale for college athletes.

“This is no joke,” McGraw said. “For those who are hearing that it’s a hoax, you almost want to shake them by the neck.”

Cal is part of the Pac-12 Conference, the last of the big-time leagues to rev up its football season. It is where The New York Times has been embedded this summer and fall, to chronicle the challenges of running major college athletic programs during a pandemic.

The Pac-12 hopes to play a seven-game season in November and December. Nothing is certain. Among the nearly eight million coronavirus cases and 215,000 deaths in the United States, colleges and universities account for at least 178,000 infections and 70 deaths, according to a New York Times analysis. Outbreaks have postponed several college football games and sidelined entire teams, leaving colleges scrambling to patch together their seasons.

The big fear, beyond a team outbreak that could spread across campus and beyond, is the death of a player. At least two have died from the virus already.

Cal and the Pac-12, eager to swim with other top conferences that are deep into their seasons, collecting attention and revenue, are just now wading into these daunting waters. During the summer, the Pac-12 had said it would delay football until 2021. But then came the Hail Mary of daily rapid-result antigen testing, through a deal with Quidel, a diagnostic health care company based in San Diego.

That is how practice begins at Cal these days. Football players come to Memorial Stadium, head upstairs to the outdoor concourse near where fans would normally line up to buy hot dogs, and stick a swab deep into their own nostrils. A supervisor gauges whether it is a successful dig.

The tips of the swabs are put into vials of solution and hustled downstairs to a student study center, now retrofitted as a coronavirus testing lab. There, several Cal sports medicine employees, trained in a new and unexpected skill, mix each sample with a reagent. They transfer the liquid into a cassette that sits for 15 minutes. Then the cassettes are loaded into one of four machines, each about the size of a toaster.

The athletic trainer Jacob Janicki called it “as simple as using an Easy-Bake oven.” A result is returned in about 11 seconds.

At about $20 per test, it costs a few thousand dollars a day to test the Cal football team and its support staff. Through the first seven days of testing, McGraw said, there were no positive results.

(Players and those in constant contact with equipment and one another are tested daily before practice, McGraw said. Coaches are tested twice a week, generally. All take weekly molecular tests, which are considered more accurate than the rapid ones, but also take longer to return results.)

University officials expect the per-test cost might fall in the months ahead, but the number of tests will rise significantly, as Cal’s 29 other sports programs follow football’s lead and begin preparations for their seasons.

This was expected to be a big year for Cal football. The Bears were 8-5 last year, including their first win over rival Stanford in a decade. A preseason poll picked Cal to finish second in the Pac-12’s North division behind Oregon.

But it is McGraw, not quarterback Chase Garbers, who might hold the key to this truncated season.

In late June, while vacationing in the California mountains with his family, McGraw developed a “wimpy” dry cough, he said. A fever followed, along with a sense of dread. A test confirmed that he had tested positive (his family did not), and McGraw spent two weeks laid up at home, isolated and debilitated by body aches.

That was about the time that other top conferences around the country threw themselves into the football season. Back then, the Pac-12 was still hanging back.

As much as any college athletic department, Cal’s tiptoes on a thin wire. Its $100 million athletic budget faces a $50 million hole if football is canceled. But Cal mostly views itself as a leading university, not a football factory. A pair of Cal professors, separately, were awarded Nobel Prizes last week.

There may be more to lose than there is to gain by playing football, part of the uneasy risk-reward analysis colleges are making this fall. But the Pac-12 decided in late September to join the others, and so McGraw is preaching discipline to Cal’s football players.

“They’re seeing examples, week in and week out, as you look around the country, of just how fragile this all is,” McGraw said. “It’s unbelievably delicate, this entire situation. It’s as if the whole building is being held together with one screw. This thing could fall apart if just one part gives.”

Cal must abide by an evolving slew of health regulations, recently loosened by state and local officials, which allowed the Pac-12’s four California teams to start practice with contact.

For now, Cal can have 75 players on the field, plus coaches and support staff, at any time, which means another 30 or so players practice separately, a sort of development squad. Masks are required everywhere, though most players wear neck gaiters, pulled up over their mouths, at least until their helmets go on. Coach Justin Wilcox, under a visor, wears his gray model over his ears and up to his eyes, leaving a mere slit that he can see through. He roams practices, mummified, and pulls down his gaiter only to shout occasional instructions.

Where things feel much different is before and after practice. The football team cannot be indoors, generally, which means no visits to locker rooms or meeting rooms. (An exception: Players can use the weight room, in limited numbers, because “gyms” in the area are open.) A large tent is where players are taped and iced by trainers.

Prepractice position meetings are held on the stadium’s open-air concourse, where about 10 75-inch televisions have been wired and then surrounded by chairs scattered for social distancing.

Defensive backs meet with a view of the campanile, Cal’s clock tower. Beyond them are the linebackers, then the six quarterbacks, each at his own table. Around a bend are packs of offensive linemen, running backs and other position groups. Coaches hold remote controls and speak through masks.

Without access to the locker room, players find their helmets, jerseys and pads awaiting them on the field. After practice, they change into the clothes they will wear home, leaving their sweaty practice gear behind. On the way out, they grab a bag of fresh clothes to wear to practice the next day.

At the end of the first session on Friday, with the field deep in late-day shadows, Wilcox gathered the team at midfield. Players took a knee — helmets off, gaiters up — maybe a bit farther apart than usual. Wilcox preached the importance of self-discipline.

A few positive tests, after all, and the screw comes loose.

A dinner buffet awaited, outdoors, near where the cafeteria remains shuttered. Players pointed to the items they wanted, and workers shoveled the food into to-go containers. They struggled to carry everything home.

McGraw noted that. Probably need more bags, he said to himself.

There is plenty to worry about, big and small. The first game is Nov. 7, and there are still unanswered questions, from where and how the coaches will sit in the press box to the risks that will accompany opposing teams. There will be even more when Cal ventures out on the road.

Already, McGraw knows that he will need three times as many buses as usual to move the team to and from airports, stadiums and hotels. Players will get their own hotel rooms instead of sharing.

The testing equipment will have to be packed up and taken along. And what happens if and when a test comes back positive?

It’s a lot to manage, McGraw said. He watched the buffet line, filled with players still buzzing from their first true practice of the season. Most were bunched together, laughing and talking and overlooking the social-distancing decals on the ground.

McGraw winced. It was all a bit too close for comfort. 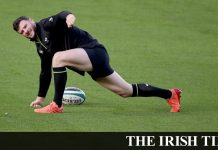 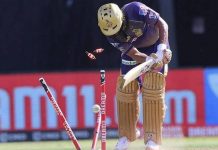 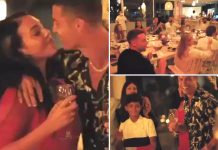 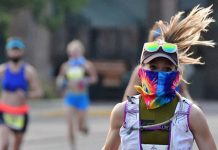 How to Run a Race in a Time of Surging Coronavirus 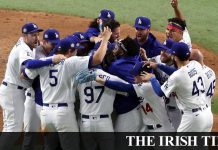 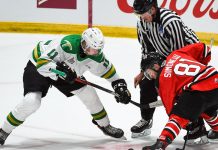 Canada’s Game Struggles to Return. And to Still Look Like Hockey 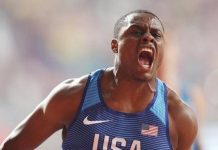