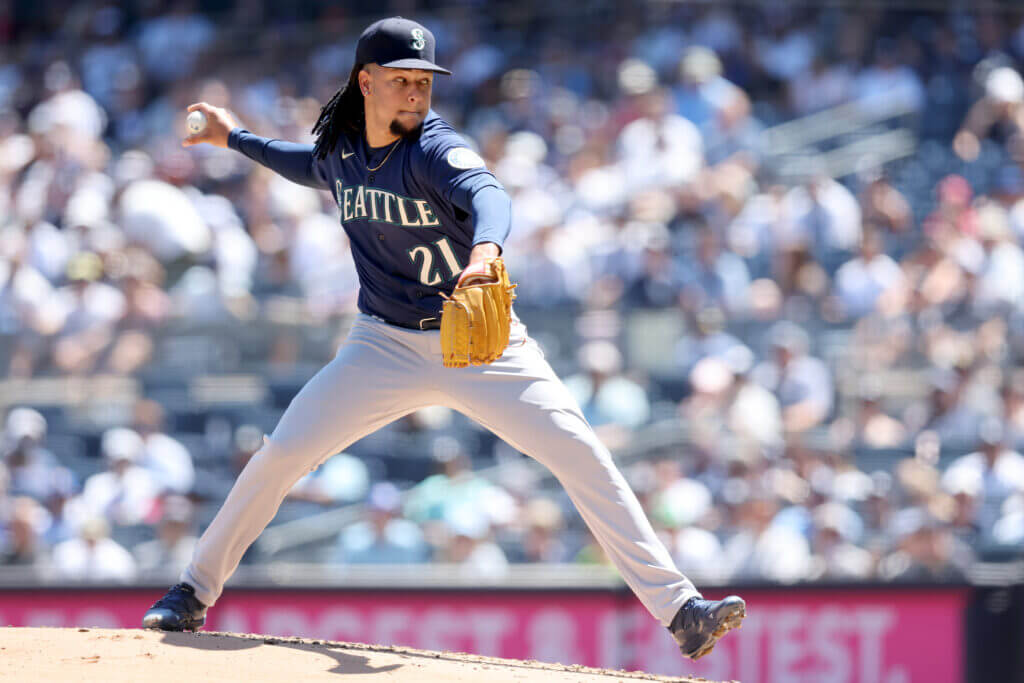 Luis Castillo’s debut with the Mariners on Wednesday couldn’t have gone much better, and the fun actually started before the right-hander even threw a single pitch.

Facing the Yankees in New York, Castillo already had six runs of support before he took the mound.

“It’s always good going up there with a little bit of a cushion,” Castillo told reporters.

The Mariners coasted to a 7-3 victory in the Bronx, taking two of three games from the Yankees, with Castillo playing a starring role in his debut for the club.

Castillo allowed three runs in 6 2/3 innings with three walks and eight strikeouts as the Mariners finished a seven-game road trip to Houston and New York with a 3-4 record.

Castillo, who allowed one run over the first six innings, got 12 swinging strikes, including five on a nasty slider that may have been his best pitch of the afternoon.

“He’s got great stuff, presence, command and a unique arm angle,” Yankees manager Aaron Boone said. “He’s got a really good fastball that he can get swing-and-miss with. He’s got a wipeout changeup, a good slider.

“He’s a really good pitcher with a lot of weapons, and that kind of unique arm angle that gives him a different look (and) helps that mid-to-upper 90s fastball play even a little more.”

Castillo, really, was as advertised.

“His best pitch might be his changeup and it wasn’t as good today,” Mariners manager Scott Servais told reporters. “He really leaned on the slider and command of it … awesome job by Luis just kind of getting established.”

The Mariners acquired him Friday from the Reds for four minor-league players, including two of the club’s top prospects — shortstops Noelvi Marte and Edwin Arroyo. The cost was steep, but you simply don’t get a chance to add one of the top pitchers in the game without giving up a significant return.

The Mariners went for it, and on Wednesday, Castillo didn’t waste any time in making a return on Seattle’s investment.

“It was a little emotional, my first game with the Mariners, but that did not distract me from my routine and we ended up getting the win,” Castillo said.

The offense, which scored eight runs Tuesday, gave Castillo plenty of cushion in the first inning as Eugenio Suarez and Carlos Santana connected for home runs off Gerrit Cole. Later in the inning, Jarred Kelenic had a two-run homer.

Castillo took care of the rest. He topped out at 99 mph, and once he was able to land his slider early in the count, he got on a roll, retiring 10 consecutive hitters at one point. The movement profile on his pitchers were alarmingly good. He pitched without fear and wasn’t afraid to attack inside the Yankees’ hitters.

“There’s a lot of guys who throw 98 (mph) in this league with movement, (but) the ability to take that to both sides of the plate so guys can’t get comfortable … there’s a lot of experienced hitters over there,” Servais said. “Luis has so many weapons and he uses them all.”

The ball Castillo probably wanted back came in the seventh inning when he allowed a two-run home run to Kyle Higashioka. He benefitted from several fine defensive plays behind him from shortstop J.P. Crawford. But other than the home run, it was mostly smooth sailing.

The Mariners (57-49) now get a day off Thursday after 13 games in 13 days since the All-Star break. They are 6-7 in that stretch, having faced the Astros seven times and the Yankees three times, and in possession of an American League wild-card spot.

In a week, the team could have All-Star outfielder Julio Rodriguez (wrist), Ty France (wrist) and Mitch Haniger (high ankle sprain) back in the lineup with a favorable schedule ahead of them.

Yes, it could be an interesting final two months, especially on days when Castillo pitches.

“He wants to be part of something special going forward,” Servais said. “It should be a fun couple of months of baseball ahead of us.”