The Black-Eyed Susan, highlight of a 14-race card that kicked off Preakness weekend, was renamed to honor the legacy of George E. Mitchell, a community organizer in the Park Heights neighborhood surrounding Pimlico. Mitchell, who died in July 2020, was instrumental in efforts to keep the Preakness at the Baltimore, Md., track.

Ridden by Joel Rosario, Army Wife finished 2 3/4 lengths ahead of Willful Woman, with Lady Traveler another 1 1/4 lengths back in third. It was 10 lengths back to the fourth-place finisher, Forever Boss, who was followed across the line by Miss Leslie, The Grass Is Blue, 2-1 favorite Beautiful Gift, 3-1 second choice Adventuring, Iced Latte and Spritz.

Breaking from the inside post position, Rosario kept Army Wife close to the rail in sixth position early as Lady Traveler raced off to the lead while being pursued by the two horses with the outside post positions in the field of 10 3-year-old fillies, Adventuring and Beautiful Gift. Fractions were :23.71 for the opening quarter mile and :46.71 for the half.

Approaching the far turn, with the first six furlongs clocked in 1:10.92, Rosario asked Army Wife to close the gap on the leader, but then had to take ahold of the filly while lacking room around the turn.

Adventuring and Beautiful Gift gave up the chase at the top of the stretch, and Rosario swung Army Wife off the rail, drawing alongside Lady Traveler. After a mile split of 1:36.79, Army Wife drew off to win going away.

The victory was the first in a stakes for Army Wife, a $190,000 purchase at the Ocala Breeders’ Sales Co.’s spring sale of 2-year-olds in training in 2020. Bred in Kentucky by J.D. Stuart and AR Enterprises, Inc., the filly out of  the Arch mare, Tread, races for the Three Diamonds Farm of Kirk and Debra Wycoff.

Army Wife needed four starts to break her maiden, winning for the first time at Churchill Downs last Oct. 25 in a seven-furlong maiden race. After a second-place finish versus allowance company at Churchill the following month, Army Wife was given a break, returning three and a half months later to win a one-turn mile allowance contest at Gulfsteam Park on March 13. She finished third behind Search Results in her stakes debut in the Grade 3 Gazelle at Aqueduct on April 3 in her most recent start.

“She’s been a hard-luck horse her whole career,” Maker said. “She’s been a filly I’ve been excited about since she was 2.”

‘I Learned From My Mistake’: Mahmood Al Zarooni Returns To Training After Eight-Year Ban

Ioya Bigtime Dies Of Colic In Uruguay At Age 14 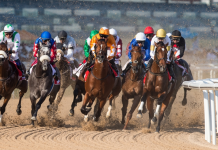 It’s A Bird, It’s A Plane, It’s Superman At The Track

Love, Audarya May Face Off Again In July 29 Nassau Stakes

Rematch? Both Subjectivist, Stradivarius On Target For Goodwood Cup