Trustees of the village of Arlington Heights, Ill., will address the future of Arlington Park racetrack and consider placing restrictions on the property’s use during a regularly scheduled virtual meeting at 7:30 p.m. CT Monday night. (To participate/view the meeting, click here for instructions.)

Churchill Downs Inc., the publicly held company that owns the track, announced in February that the 326 acres on which the racetrack sits will be offered for sale but that the company may pursue using the racing license elsewhere in the state. CDI officials stunned the racing community in 2019 when they announced, following passage of legislation that would permit casinos at racetracks, that Arlington would not seek a casino license – something they had lobbied for alongside horsemen for decades. While officials cited dissatisfaction with the law’s tax structure, it is widely believed that CDI did not want an Arlington casino to compete with the nearby Rivers Casino, of which the company is majority owner.

Item XIII on the meeting’s agenda has two items listed under “legal”: a resolution regarding zoning regulations for the racetrack property, and an ordinance amending “negative use restrictions” that would seek to prohibit CDI from selling the property with usage restrictions (i.e., no horse racing or gambling) that run contrary to the village’s public policy. The ordinance is designed to “preserve all options for the property whether it includes complete redevelopment through a long-term master plan or continued use as a horse racing facility with additional redevelopment,” according to a report from the village’s planning and legal staff.

“We are planning to take some proactive steps to ensure that any future plans discussed for Arlington Racetrack meet the desired land uses the village would like to see on this significant parcel, and that the door to continued horse racing at the track remains open,” Arlington Heights Mayor Tom Hayes said in a statement reported in the Arlington Daily Herald.

The Daily Herald reports that Mike Campbell – president of the Illinois Thoroughbred Horsemen’s Association – and perennial leading trainer Larry Rivelli are working separately with potential investors to buy the property and continue racing.

Hayes told the Daily Herald that continuation of live racing and a new stadium for the NFL’s Chicago Bears are two possibilities for the site.

The village’s planning and legal staff recommends passage of a resolution regarding zoning regulations that would put “prospective purchasers and the public on notice that the village intends to make changes to the zoning, subdivision code or other regulations. The resolution states the fact that the village is considering making changes to the zoning ordinance to restrict certain uses and establish other development standards that would be applicable to Arlington International property.”

French Champion Jockey Boudot Suspended After Being Charged With Rape 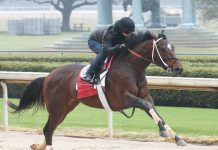 A Most Peculiar 2021 Preakness, Ready For Prime Time