Applaud the Devils for Trying Something Different with New Jersey


Before we get too deep into this column, let’s be honest: talking about NHL jerseys is about as subjective as it gets.

For example – I know the Colorado Avalanche’s jersey has been the same forever, but I’ve never had much time for it, and I think it’s long past due for alterations and a new design. But I get that many Avs fans don’t want it to change one iota. People grew up with it through the franchise’s glory years, and they connect with it. I didn’t grow up attached to it, so I’m less emotional about it.

And that brings us to the focus of this column: the New Jersey Devils’ new third jersey – the first one in the franchise’s 39-year-history. Devils ownership unveiled the new uniforms Tuesday, and although the reveal has met with mixed results among the team’s fans, going with the more familiar/colloquial “Jersey” is a good choice that likely will have pop culture ramifications when celebrities from New Jersey embrace this new design.

The Devils say this new iteration of their uniform is in part a tribute to the five players who’ve had their jersey number retired; the five stripes across the left shoulder represent Ken Daneyko’s No. 3, Scott Stevens’ No. 4, Patrick Elias’ No. 26, Scott Niedermayer’s No. 27, and Martin Brodeur’s No. 30. In addition, the new jersey’s black and striping pattern is tribute to the pro hockey teams also from New Jersey: The Newark Bulldogs (Canadian American League, 1928-29); the River Vale Skeeters (Eastern League, 1939-42); and the Jersey Larks (Eastern League, 1960-61).

You can appreciate the attention to detail of the Devils’ new uniform, and still like the overall color choice of black and white, with a dab of red. In some ways, it’s a takeoff on the former New Jersey (and currently, the Brooklyn) Nets’ black-and-white current outfits. This is the first time the Devils’ jersey won’t include the entire “NJ” state short-form, but that’s OK. One of the Toronto Raptors’ alternate jerseys has neither a “Toronto” or a “Raptors” on the front of it. Instead, it simply reads “The North”. Jerseys these days are all about getting as creative as you can.

In that sense, the Devils’ new jersey does the job. It will appeal to native New Jersians and to those who move to the state. It will catch the eye of hockey fans accustomed to the devlish “NJ” logo, and provide another revenue stream for a team that has to operate in the expensive greater New York City area. And it probably will trigger a small outbreak of teams short-forming their overall franchise name: As it stands, the NHL doesn’t call its Las Vegas team “Las Vegas”, preferring the shorter “Vegas”. How long until we see only the word “Vegas” on a Golden Knights jersey? I say sooner.

I’d be remiss if I didn’t reference the hours and hours the Devils’ new uniforms must have gone through in test-marketing operations and other research on the science of selling jerseys. But, given that the on-ice product in New Jersey is starting to show solid results, it’s as good a time as it will ever be to switch things up a little on their third jersey. New era, new optics.

You may be a diehard red-and-green Devils fan, but that doesn’t mean there’s not room for a different take on how they should look on the ice. There is room. New Jersey will wear the “Jersey” uniform 13 times this year, and by the 13th time, you’ll probably be good with it.

If not, start lobbying for a fourth Devils jersey.

You Can't Really Stop Brad Marchand From Doing What He Does 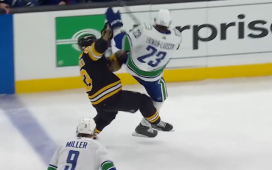 Sessions with Stephens and Pulver: Re-Igniting the Expansion, Relocation Discussion 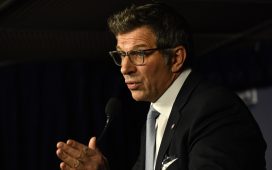 Which Eastern Conference Club is Interested in Evander Kane? 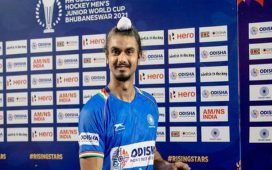 India will be at its best against Belgium: Araijeet 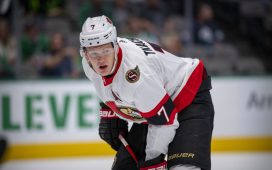