Friday night’s $731,650 finals of the Sam Houston Futurity for 2-year-old Quarter Horses saw its field of 10 reduced to just three runners following the revelation that the prohibited drugs clenbuterol or albuterol were detected in hair samples in six entrants and two other test samples were considered inconclusive.

Juan Diaz Jr. trained the top two finishers in the race, Bh Inxs and Hock It To You, while Roberto Madrigal trained the third-place finisher, Lucky Dice.

Officials at Sam Houston Race Park in Houston, Texas, announced on Thursday, a day after the Paulick Report first reported the hair test findings, that the Futurity would be contested as a non-wagering event.

· Hair Test samples on May 15th

Throughout this time period, all qualifiers were required to remain on Sam Houston Race Park (SHRP) property until the conclusion of the finals. TxRC staff notified SHRP that all post-race samples were negative for the ten qualifying participants prior to entry day on May 21 for the Sam Houston Futurity Finals.

On Wednesday, May 26, TxRC staff informed Sam Houston Race Park of the following results from the hair testing performed on May 15:

A second hair sample was taken on May 26 of those horses who tested positive or inconclusive.

Based on this information, and to protect the interest of the wagering public, Sam Houston Race Park will conduct the running of this race as a NON-WAGERING event and those Sam Houston Futurity participants will compete for purse money only.

Effective immediately and until further notice, Sam Houston Race Park will stop accepting future entries from those trainers whose horses tested positive. Entries have already been accepted through Thursday, June 3, 2021.

Sam Houston Race Park reserves the right to issue further disciplinary actions against the trainers of these horses, pending actions of the Texas Racing Commission, including the results of second hair test samples if applicable.

‘Figuring Out The Puzzle’ Keeps Training Exciting For Shane Wilson 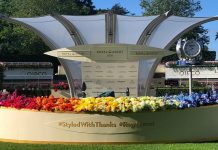